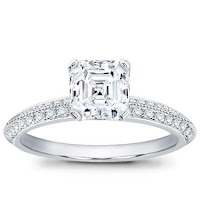 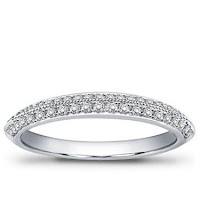 Si purchased my engagement band from Adiamor, and since they were so great to him during that process, he was thrilled when I wanted the matching band as well, just for the chance to work with them again. We were also hoping to pick out Si's ring from Adiamor, but after a few weeks of looking, he just couldn't find anything that caught his eye. One day, while we were in the mall, we decided to just stop in to a jewelry store, and see if we could start to figure out what he liked. Then and there, he found the ring he loved, and we purchased it right then! 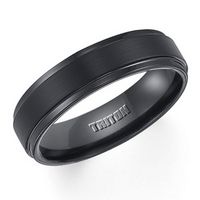 This ring is great, because it's a perfect fit for both Si's style as well as his work. It's made of Tungsten Carbide, which is an extremely hard material, and very scratch resistant. With the computers and servers that he sometimes has to move all over, we wanted to be sure that his ring wouldn't be all scratched up. Similar to how we went with platinum for my ring, we wanted a ring for him that would withstand the test of time.

Overall, that wasn't as hard as I thought it would be, and we found his ring where we least expected to find it! Did you have an easier time deciding on your ring than your fiance like us, or were the roles reversed?